Don’t be Scammed by an Online Dating Site 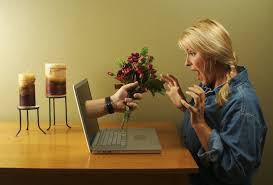 Wow. Just read about a poor guy who was scammed by an online dating site for over $800,000. He has lost everything and now living with his daughter. Evidently his wife had just died it says (bit of a worry that he was hitting a dating site so soon after his wife died of cancer but who are we to judge here…and ‘soon’ could have just been a journalist term to sensationalize the story, who knows, and soon could be a year I guess for some people…anyway back to the topic at hand). The dating company run by a husband and wife and one other woman has been taken to court for defrauding over two million dollars but since they have been declared bankrupt there is no hope of recovering the money for this poor man.

Why the man transferred so much money, including something like one hundred and twenty thousand that he borrowed from a family member, we can only imagine, but they say he was repeatedly preyed upon because of his vulnerable state after his wife’s death. Surely he should have seen the red flags and that warning bells should have started ringing way earlier. Evidently he did meet the woman in her country once or twice and they agreed to get married.  She even visited him in his country, presumably all paid for by him of course, but she insisted on separate beds during her stay giving the excuse that she had promised her mother not to sleep with him until they were married. You have got to admire these people for the excuses and lies they think of.

Anyway only after he has given the agency some eight hundred thousand dollars was his suspicions aroused when he called the dating agency and immediately recognized the voice of the ‘receptionist’ who answered the phone, who had given a different name of course, was in fact his so called fiance. I guess the penny finally dropped then and he reported it to some authority.

Generally these authorities are not that quick to act, or they take time to gather evidence before the true extent of the fraud is uncovered, and meantime they continue to defraud more and more people with relative impunity. In this case the defendants lost with the judge saying it was one of the most despicable and blatant crimes he has ruled against, but nevertheless because the defendants were already bankrupt then there was no chance of him getting his money, or indeed any money back. Of course the money is not gone and probably  merely funneled elsewhere, or maybe all spent but some should have been able to be recovered from the sale of any ill gotten assets acquired by these fraudsters, but as the law in most countries it seems protects the rights of the perpetrator rather than the victim any recovery of at least some of his money is remotely unlikely and would soon be gobbled up in liquidator, accountants and lawyers fees or taken by the government in unpaid tax earnings as it is highly unlikely that these excessive earnings would have been declared in their business accounts and tax paid on it already.

So, how to avoid be scammed by an online dating site? Keep your eyes open. Step back and use your brain. Does she sound too good to be true? Are things moving too fast? Has she fallen in love with you after two letters? Is she younger than you? Much younger!. Much much younger? Is she asking you for money due to a death or illness in the family, for travel, an operation?…you get the picture.

I am sure you don’t tell people you have joined a dating site or are using a dating agency, but run it past a friend, family member, work colleague or someone who can see it from a distance and get their opinion. Of course their opinion may be wrong and they are just cautious but listen to what they have to say and above all to avoid being scammed, don’t send any money for whatever reason. I am sure you can come up with an excuse for not sending the money that seems just as plausible as their reason for wanting it and you will soon see if it is a scam or not. Something like you can’t send money right now as your accounts have been frozen due to someone hacking your password, an unexpected tax bill, an operation for your sister, or something…anything. You will soon see if she is genuine or not, but be wary as these scammers don’t give up easily if they know you have some money.

This entry was posted in Uncategorized. Bookmark the permalink.